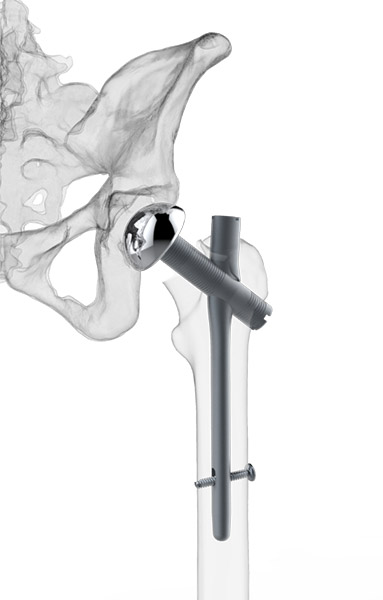 DISPLACED INTRACAPSULAR HIP FRACTURES IN PATIENTS OVER 80 YEARS OF AGE

They pose a real challenge to all healthcare systems worldwide because of the extraordinary economic costs involved.

Depending on where the fracture is located:

Extracapsular: outside the hip articular capsule. Approximately 50% of the total

Intracapsular: inside the hip articular capsule. Approximately 50% of the total

Reaching 80 years of age marks the beginning of the “fourth age”.

Fourth-age patients are usually weak, polymedicated, suffer reduced physical activity and, in many cases, have functional dependency on basic activities of daily living. It is called the “frail elderly“.

The goal for treating these fractures in fourth-age patients is to allow them to recover their ability to walk with the least possible surgical aggression in order to shorten their bedridden hospital stays and their hospitalization.

The treatment indicated for displaced intracapsular hip fractures in fourth-age patients is the hip replacement.

Current hip replacement surgery poses a number of risks and complications which cause the aggravation of illnesses in the elderly patient at the time of fracture and which carry also serious consequences. 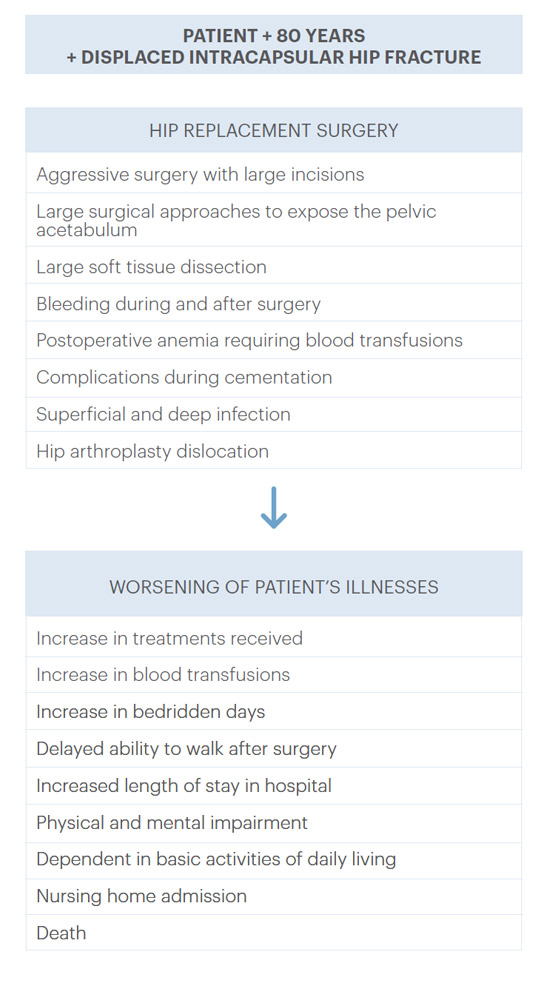 To achieve a minimally invasive partial hip replacement, specific instruments and arthroplasty components have been developed to overcome the following technical problems:

To solve the first problem, an innovative surgical instrument set has been designed to allow for the minimally invasive Femoral Head Removal (FHR Instrument set) through two small incisions; minimizing the aggressiveness with respect to the current surgical technique for the femoral head removal.

To solve the second problem, an innovative hip prosthesis (MIHA Prosthesis) and its specific instrument set to place it in a minimally invasive way (MIHA Instrument set) have been designed.

The components of the MIHA prosthesis are inserted and assembled together in a guided way by the same 2 small incisions used to remove the femoral head.

This new extractor is cannulated allowing for its insertion into the femoral head guided by a Kirschner wire.

It has retractable claws that can be opened from the outside increasing the grip of the extractor to the femoral head.

For the design of the MIHA prosthesis, a standard partial hip prosthesis has been divided into 3 components and 2 screws.

The 3 components and 2 screws of the MIHA prosthesis can be inserted and assembled together precisely by the 2 small incisions through which we have previously removed the femoral head.

In order to achieve this, a specific introducer has been designed for each of them. 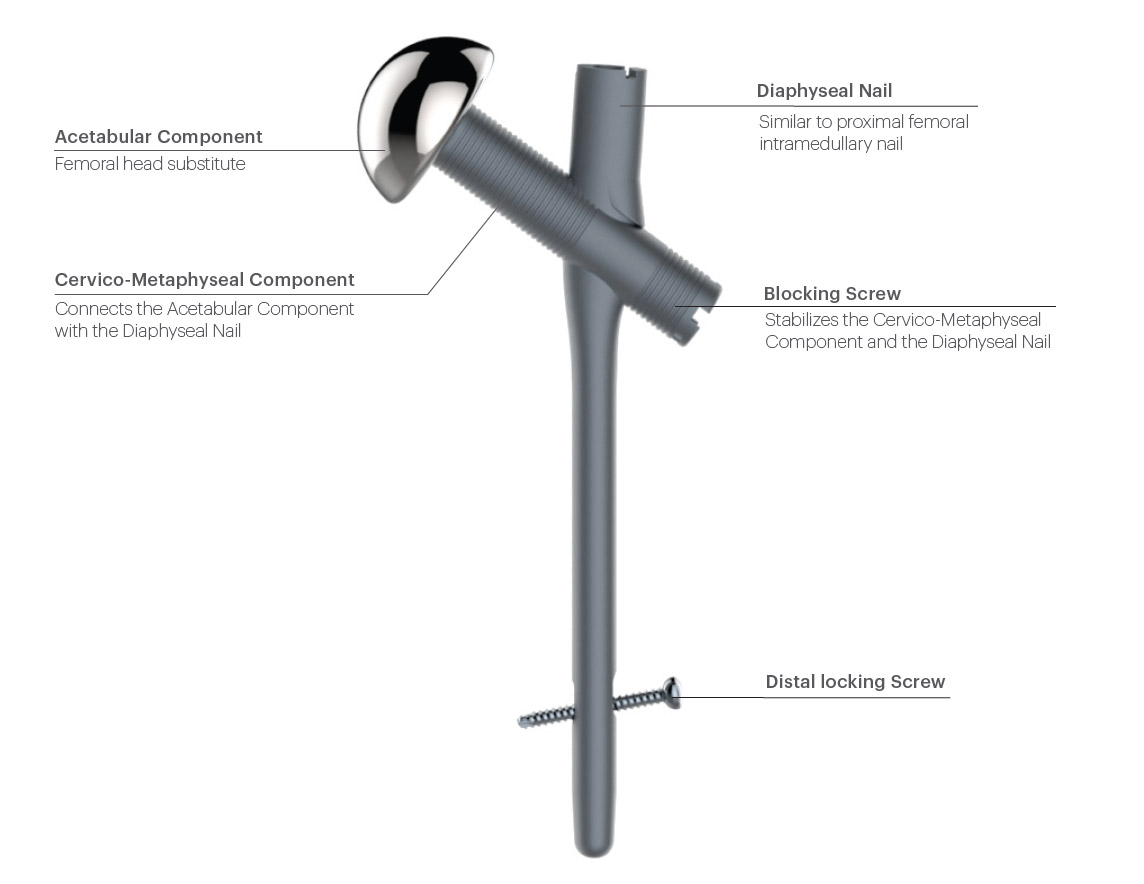 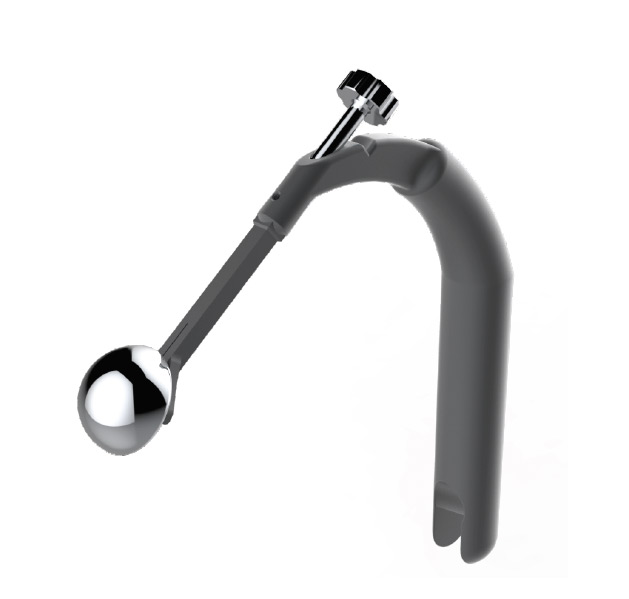 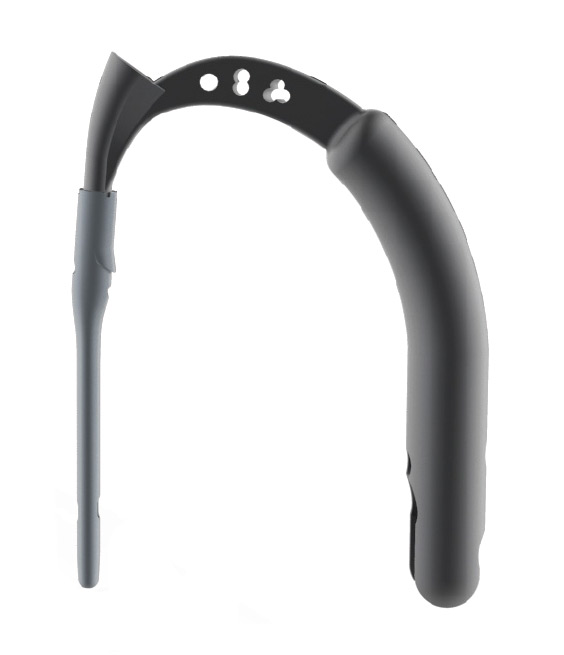 The Institute of Biomechanics of Valencia (IBV) has carried out the mechanical tests of the MIHA prosthesis in titanium alloy Ti6AI4V according to the ISO 7206-4:2010

Fatigue testing of the MIHA prosthesis embedded in bone cement (PMMA) only on the distal part:

Fatigue testing of the MIHA prosthesis implanted in synthetic bone: 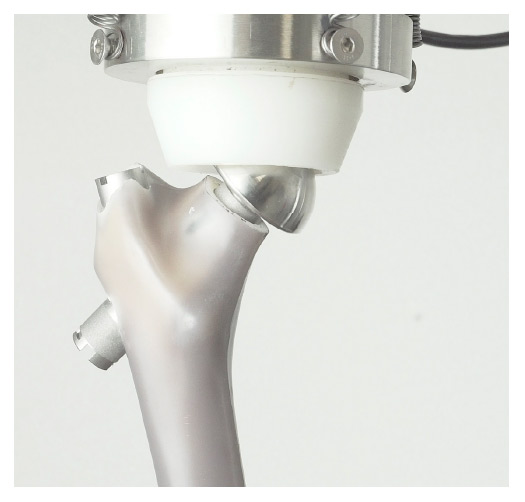 The Institute of Biomechanics of Valencia (IBV) (www.ibv.org) is considered a point of reference in Spain and in Europe for the biomechanical evaluation of products and services in the healthcare technology field.

It is located within the Universidad Politécnica de Valencia (UPV) campus where more than 1600 scientists work on different projects.

The Universidad Politécnica de Valencia (UPV) (www.upv.es) is amongst the universities in Spain which earn more revenue regarding competitive research, R&D contracts, consulting services, service provision and technology licenses. It is also the national leader in patent exploitation.

THE COST OF HIP FRACTURES 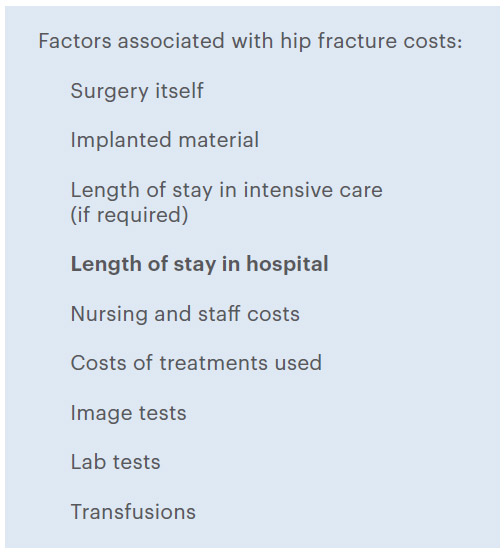 A total of 1.800.000 hip fractures are estimated per year worldwide:

Around 450.000 of them are displaced intracapsular fractures in fourth-age patients. 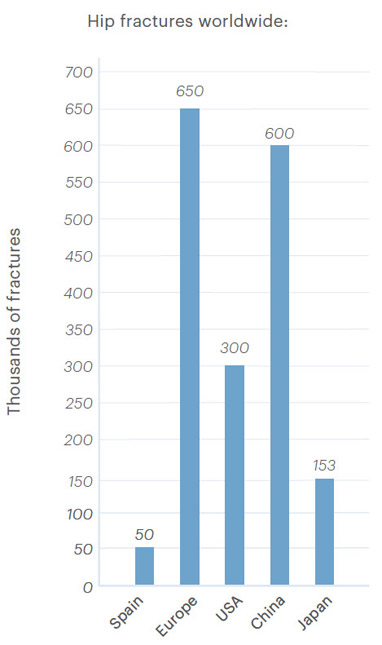 In 2040 around 1.5 million fourth-age people worldwide will suffer a displaced intracapsular hip fracture indicated to be treated with the PARTIAL HIP MIA SYSTEM

It is estimated that more than 6 million people will suffer a hip fracture by 2040 worldwide and 20-25% of those fractures will be displaced intracapsular hip fractures in fourth-age patients. 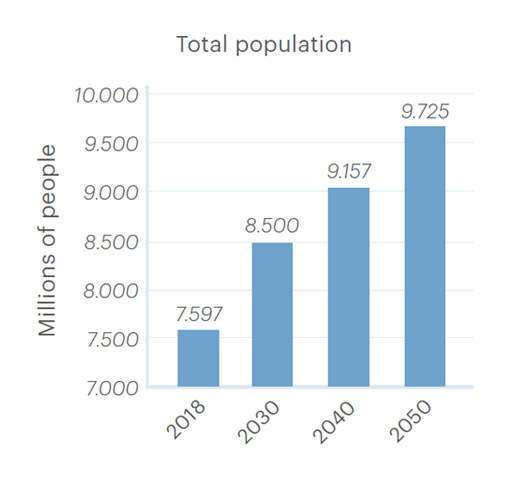 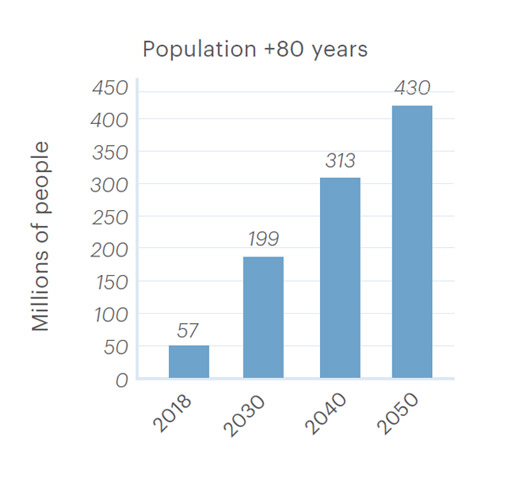 The PARTIAL HIP MIA SYSTEM has achieved a milestone in the history of traumatology and orthopaedic surgery worldwide: to replace the hip joint in a minimally invasive way, quickly, simply and performed by a single surgeon

Reduction of blood transfusions and bleeding.

Reduction of treatments to deal with complications.

Reduction of length of stay in hospital.

Improvement in short-term and long-term prognosis. 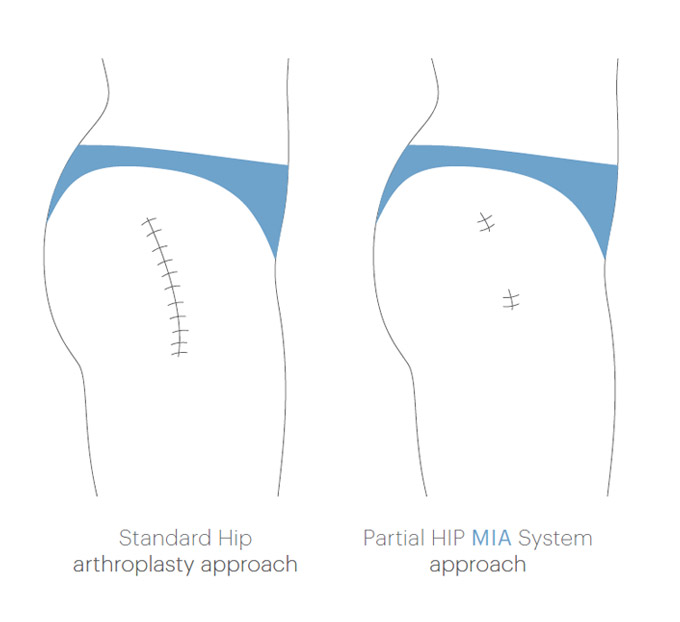 BENEFITS FOR THE HEALTHCARE SYSTEMS

Surgery performed by only 1 surgeon.

Reduction of post-surgery complications. Therefore, treatments received and the length of hospital stays  are reduced.

Reduction in the number of assessments from other specialists for the treatment of complications: internal medicine, pneumology, nephrology, cardiology, etc.

Reduction of rehabilitation and physiotherapy needs.

Reduction of sick leave requests by relatives who take care of the patient.

Increased availability of surgeons in hospitals.

Reduction of waiting lists for other pathologies.

Each day of hospital stay that is saved with the PARTIAL HIP MIA SYSTEM will mean a saving of 100 millions of euros for the European healthcare systems.

Until now, for the treatment of degenerative hip diseases in adults, manufacturers have focused on the minimally invasive TOTAL hip replacement.

To this end, they have developed different instrument sets and mini femoral stems that allow to perform a minor approach regarding the conventional hip arhroplasty surgery.

There is no company on the global market with a minimally invasive partial hip replacement system designed to treat displaced intracapsular hip fractures in patients over 80 years of age.

DIFFERENCES WITH THE REST OF MANUFACTURERS

The PARTIAL HIP MIA SYSTEM has been developed to perform a PARTIAL hip replacement, for this reason there is no need  to expose the pelvic acetabulum.

This reduces the number of instruments needed to perform the surgery and reduces the size of the incision compared to conventional minimally invasive surgery.

The new PARTIAL HIP MIA SYSTEM is based on a different concept: a new and innovative partial modular hip prosthesis, the MIHA prosthesis, with its specific instrument set that allows it to be implanted in a minimally invasive way 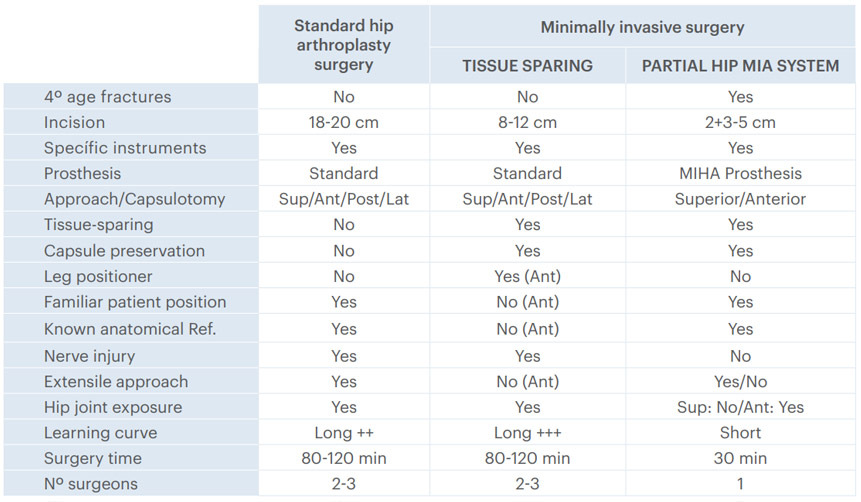 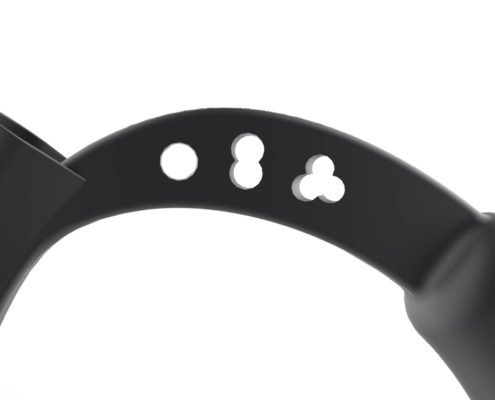 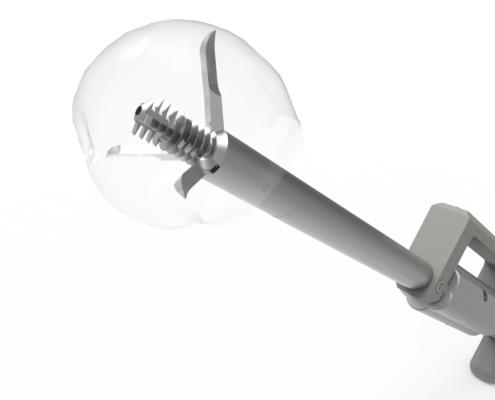 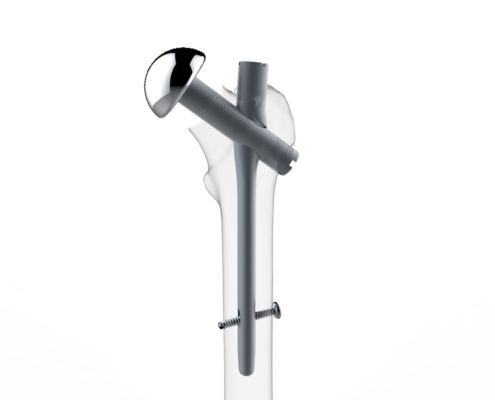 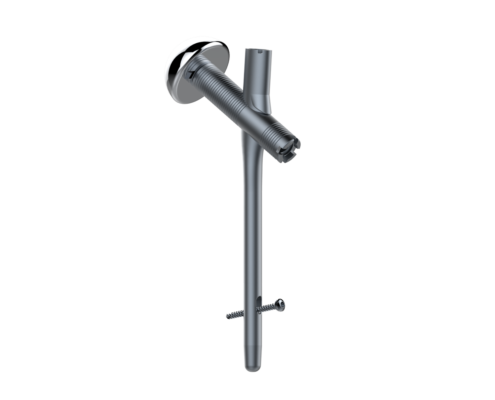 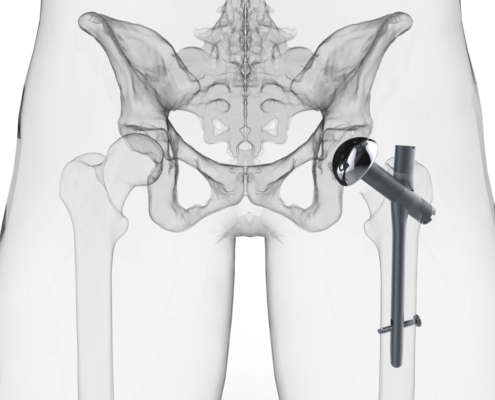 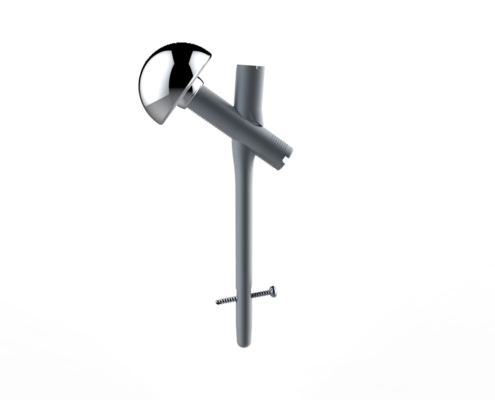 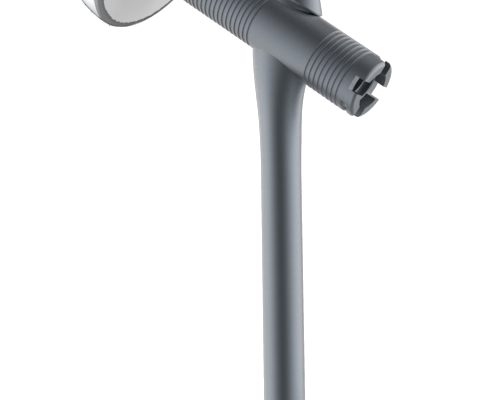 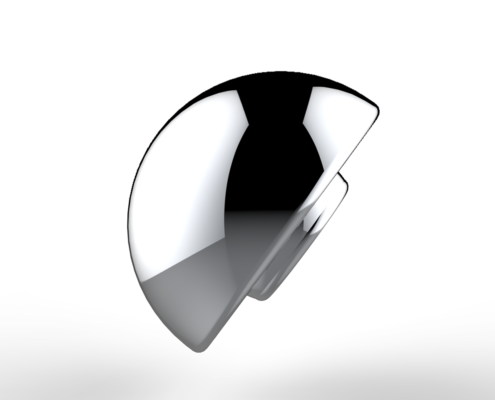 The content of the web has exclusively an information purpose. The access facilitated to it and its content does not constitute an act of commercialization or an offer of goods or services. No license, assignment or conveyance of any right is granted or implied by your access to the web.

The invention explained and the images and animations shown are subject to patent rights and copyright. The names appearing in this web are not used as trademarks, and there is no trademark claim on them. They are exclusively used for illustrative and information purposes, on a private and confidential basis.